John Neumann was born in Bohemia on March 28, 1811. He entered the seminary in 1831. Two years later he entered the university in Prague, where he studied theology.

His preparations for the priesthood were completed in 1835, but he could not be ordained in his own diocese because a limit had been placed on the number of priests. So he offered to do missionary work in a “mission country,” the United States. Arriving penniless in New York, he was accepted into the diocese and ordained a priest in June of 1836. He was assigned to mission churches near Buffalo, where he labored zealously for four years.

Feeling the need for spiritual support, he applied to the Redemptorists. He became the first priest to enter the Congregation in America when he took his vows in Baltimore in January of 1842.

From the beginning he was highly regarded for his evident holiness, for his zeal and affability. His knowledge of six languages made him particularly apt for work in the multilingual society of 19th century America.

Father Neumann was named bishop of Philadelphia and consecrated in Baltimore at St. Alphonsus Church in March of 1852. He organized a diocesan education system of parish schools, staffing it with religious sisters and brothers to teach in it. One source of teachers for him came from the Sisters of the Third Order of St. Francis, which he founded. The Cathedral of Saints Peter and Paul was one of 80 churches built during his episcopate.

Nicknamed the “Little Bishop” because of his height (he stood roughly five feet four inches), St. John Neumann was never robust in health, but in his short lifetime he kept up with his pastoral duties while publishing numerous articles and authoring two catechisms.

On January 5, 1860 he collapsed and died on a Philadelphia street. He is buried in St. Peter the Apostle Church in Philadelphia. He became the first American male to be declared a saint when he was canonized in June of 1977. 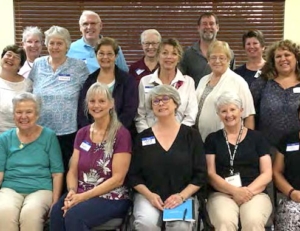 Although we were committing to a full year and at times it was difficult to juggle work and family commitments, it was well worth it. Learning about Redemptorist Spirituality was amazing – I can’t wait to learn more. I was impressed that when a member of our group was facing a challenge, you brought the group together to say a prayer, have a moment of silence, sign a card, or just listen if someone needed to talk – modeling behaviors that we can emulate when we are serving the community.
—Mary Phillips